RTPOS is a ram scraper used to find credit card data within a process memory address space. Credit card data is saved into a log file that needs to be manually grabbed by the malware operators.

It supports two command-line options to either install itself as a service or remove the existing installation:

When executed with the install argument, RTPOS installs itself as a service named WinLogon with the start type set to auto start:

RTPOS creates a file mapping to store the credit card data before saving it to disk:

RTPOS saves the logs with credit card data in a file named sql8514.dat inside the folder C:\Windows\System32 or C:\Windows\SysWOW64\ if the malware runs in a 64-bit machine:

The malware enters in a loop where it will keep scanning the running processes for credit card data:

To read the memory of the targeted processes, RTPOS uses the classic combinations of Windows APIS:

The credit card tracks are validated with the Luhn algorithm: 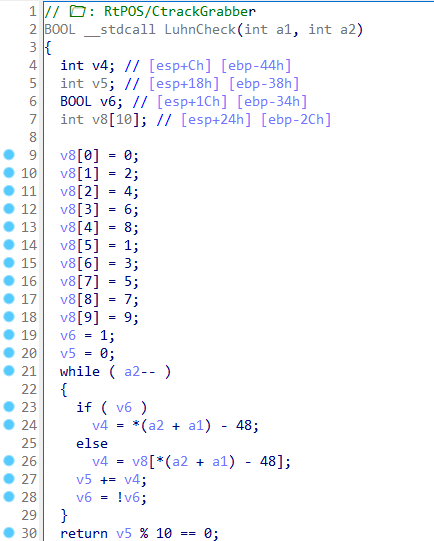