Packers are a common way for adversaries to protect their payloads, avoid detections and make reverse engineering a bit harder.

Manual analysis of packers helps in tasks such as making signatures to track more malware using that specific packer and developing tools that allow us to unpack malware automatically. To do that, reverse engineers need to understand how the packer is working.

I like automating tasks whenever is possible, and I’ve always wondered about the automation of unpacking malware.

Recently I’ve started to read more about emulation and came across the Qiling framework. The idea of unpacking malware via emulation seemed very interesting hence I started exploring the capabilities of Qiling for this specific use case.

Here I’ll try to explain my approach to unpack RAGNARLOCKER with Qiling.

To extract the payload via emulation, I needed to understand how the three stages of this packer work.

There was no need to understand all the details of the algorithms used by this packer since I’ll just let the malware run (with Qiling) and let it unpack the payload itself.

Instead, I need to understand the flow of the unpacking routines and try to identify a stage where the payload is unpacked in memory so that I could dump it.

In this first stage, the packer executes several worthless instructions, functions, and loops to slow down the analysis. It also uses some anti-emulation techniques, possibly to avoid emulators like Qiling. Below it’s possible to see some examples.

Giant loop to slow down the execution (this is costly to an emulator, specially one that is written in python): 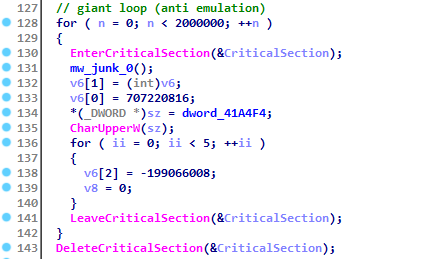 GetLastError() is used to check the last error code of the calling thread. The packer calls SetWindowContextHelpId() with an invalid handle and checks if the last error is ERROR_INVALID_WINDOW_HANDLE that corresponds to the value 0x578.

In this stage, the packer allocates a new memory region, decrypts a shellcode, copies it to the newly allocated memory, and executes it.

As seen, a handle to KERNEL32.dll is passed to the shellcode. This handle is later used to resolve all the needed APIs.

In this last stage, the shellcode decrypts the payload and loads it using a self replacement technique. 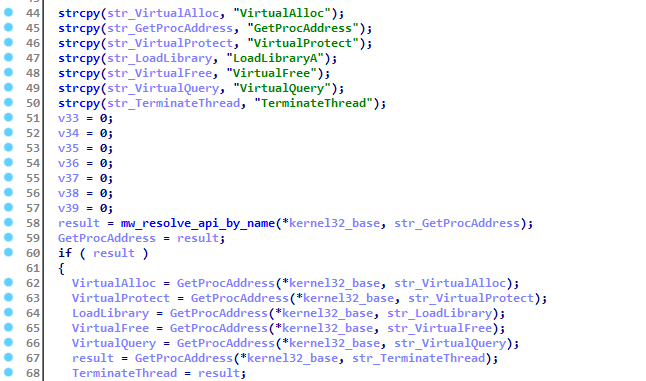 Summary of the APIs used by the shellcode:

Copying the encrypted payload to the first memory region and decrypting it:

Copying the decrypted payload from the first memory region to the second memory region, and calling VirtualFree(): 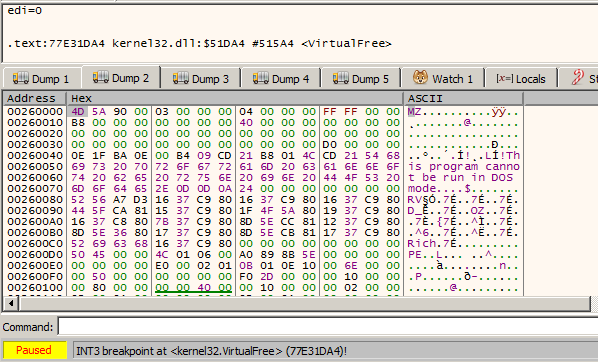 Based on the analysis of the packer the strategy to unpack the payload with Qiling is the following:

The strategy seems simple enough, but I also needed to overcome the anti-emulation tricks and Qiling limitations:

Qiling is a high-level framework that tries to emulate both the CPU and the OS.

Qiling is designed as a higher level framework, that leverages Unicorn to emulate CPU instructions, but Qiling understands OS: it has executable format loaders (for PE, MachO & ELF at the moment), dynamic linkers (so we can load & relocate shared libraries), syscall & IO handlers. For this reason, Qiling can run excutable binaries that normally runs in native OS

The advantage of using a framework like this to unpack malware is that there is no need to understand all the unpacking algorithm. Also, the unpacker script may survive updates in the algorithm of the packer.

As seen before, this packer uses the GetLastError() to check if the last error code was 0x578 after calling SetWindowContextHelpId().

Fortunately, in Qiling, it’s possible to set specific error codes. The hook implementation for this API is the following:

As seen before, the packer uses a large “for” loop possibly to avoid being executed under emulators like Qiling.

Fortunately, Qiling can search for specific byte patterns in memory and patch them.

The bytes that I choose to patch were the ones that make the instruction cmp [ebp+var_1B8], 1E8480h:

The idea was to change the instruction to cmp [ebp+var_1B8], 0. This way the code does not enter the “for” loop.

Some Windows APIs aren’t supported in Qiling yet. In Qiling, to implement an API, it’s the same as hooking an API.

With the anti-emulation loop patched and the Qiling limitations been taken care of, it was a matter of hooking the rest of the needed functions to keep up with the unpacking strategy.

Things to notice in the above definitions:

The function that dumps the memory region: 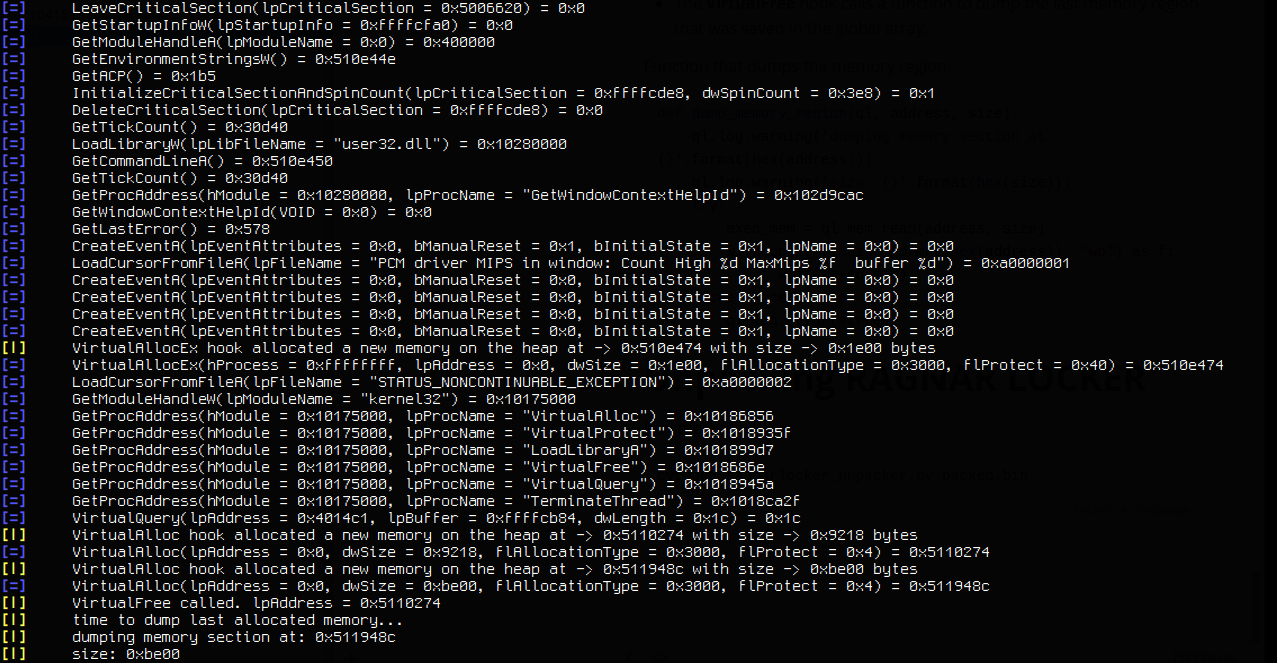 As seen, the script was able to dump the unpacked RAGNARLOCKER payload:

As seen, PE-BEAR opens the unpacked file with no problems: 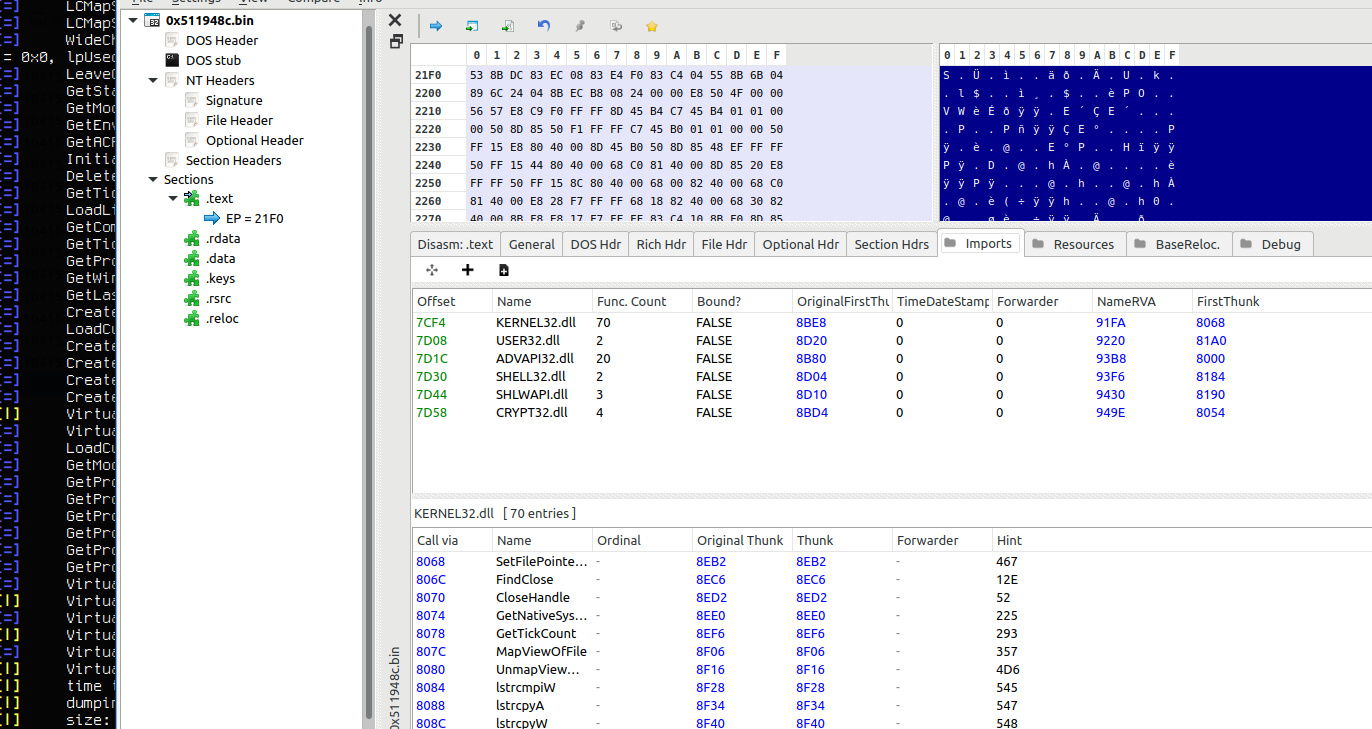 I can see the potential in using a framework like Qiling to automate reverse engineering tasks, and I’ll keep exploring emulation and other use cases besides unpacking.

Here you can find the source code for the emulator